What is a CD? (Certificate of Deposit) Napkin Finance has the answer...
Home Retirement CDs 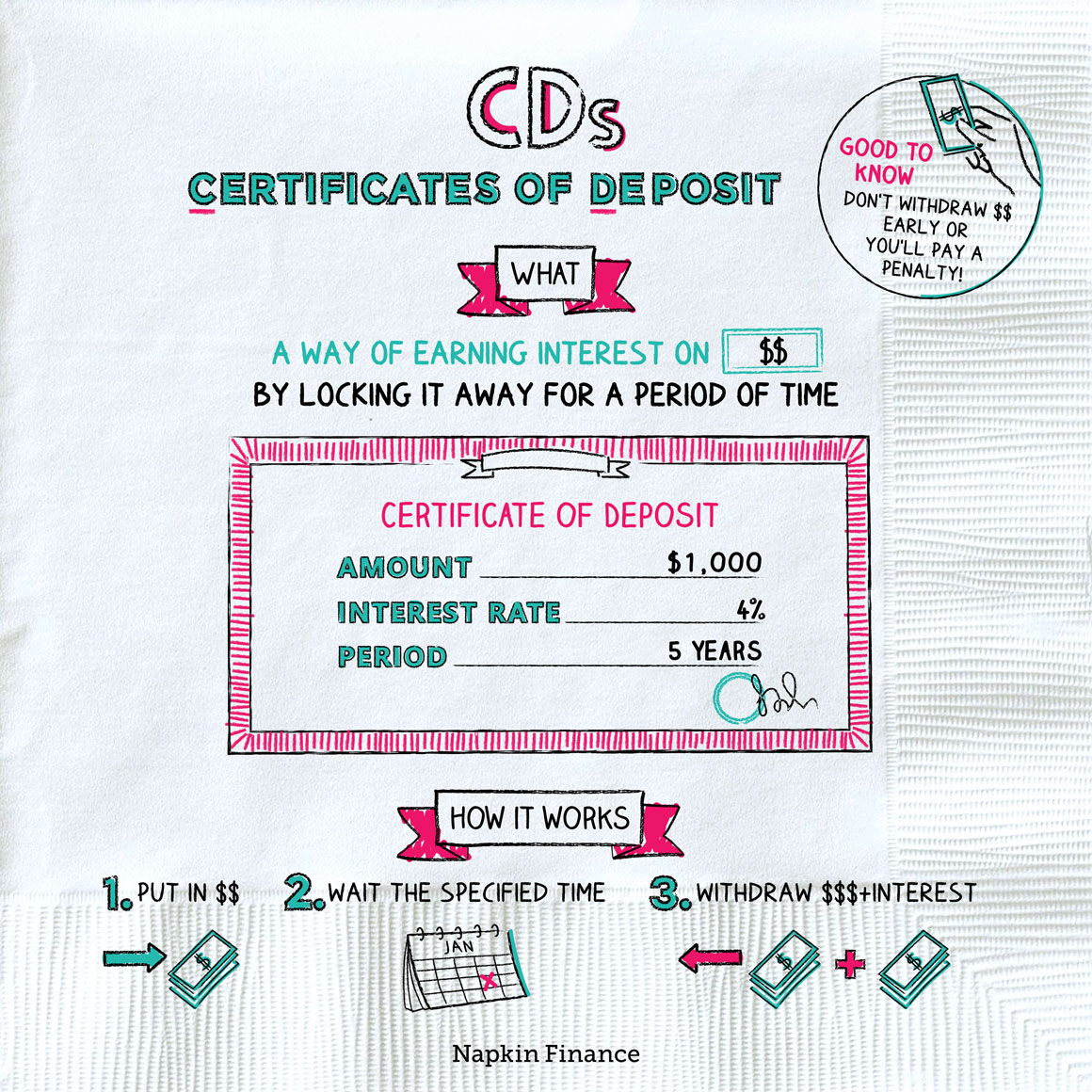 Certificates of Deposit, or CDs, are low-risk investments that pay interest. You can think of them as alternatives to savings accounts, with the main difference being that CDs lock up your money for a set period of time.

When you buy a CD, you make a deposit with a bank, wait until the CD matures, and then get your initial investment back plus interest.

Here’s a rundown of the basic features of CDs:

CDs can be a great option for money that you need to keep safe and that you only want to invest for a short period of time.

They don’t typically make great long-term investments because they pay such low rates of return (that’s why investing in a mix of stocks and bonds is generally a better option for your retirement fund). But if you’re looking to earn a small return on your down payment fund—and you plan to buy a home in one year—then a CD could be the right choice.

Here’s how investing in a CD works:

Step 1: Think about how long you want to invest your money. Common terms range from six months to five years.

Step 2: Compare rates among banks for that term. Choose a bank and a specific CD.

Step 3: Open an account with that financial institution and buy the CD.

Step 4: Leave your money in the CD for its full term.

Step 5: When your CD matures, you can withdraw the money and do something else with it, or you can roll it over into a new CD

Like other financial products, CDs can come with a number of bells and whistles. Here are some of the main varieties:

CDs are typically lumped into a category of investments called “cash-equivalents”—along with other options that are essentially as safe as cash but offer 1slightly higher returns. Although there are some important distinctions in the nuts and bolts of how different cash equivalents work, they all count as low-risk, low-return options. Here are the main ones:

CDs are one main option to consider for money that you want to keep safe over a relatively short period of time, such as six months to a few years. They typically offer higher interest rates than savings accounts—but the trade-off is that they require you to lock up your money for the CD’s full term (or else you pay a penalty). CDs count as low-risk, low-return investments.

Fun facts
Key takeaways
The advantage of a CD versus a savings account is you can’t dip into a CD for ‘emergency’ Beyoncé tickets. — Napkin Finance