At some stage, most entrepreneurs will need to finance their startup. This means raising money to fund the continued growth and development of their business.

Financing a startup can be one of the biggest challenges an entrepreneur will face.

Roughly 90% of startups fail, and a large part of this is due to the inability to raise enough money.

Investors and financial institutions specialize in funding different stages of the startup lifecycle.

Each stage has two unique factors

While there are no rules or set formulas for startup financing, it is important to understand the risks and opportunities at each stage.

Where to raise money

There are numerous ways to raise funds depending on the stage and funding needs of a company.

Calculator: Who wants to be a millionaire?

So, you’re building the “next big thing” and ready to raise money.

In the beginning, it’s a catch-22 (a lose-lose situation). You need financing to build the product or service, but very rarely will an investor give you money without a beta (prototype version) already built or customers already using the product.

How to raise money

The first step is often bootstrapping- starting a business using personal means and finances to get it off the ground.

Ways to bootstrap can include:

Did you know that there are no taxes or penalties for using a 401(k) or IRA to fund your business?

From there, most startups need to move on to outside investments. Aside from the money, there are other benefits that come from bringing on investors.

Benefits from bringing on outside investors:

If investors have experience in the same industry, they can make it much easier to recruit talent and grow the business with their expertise and network. 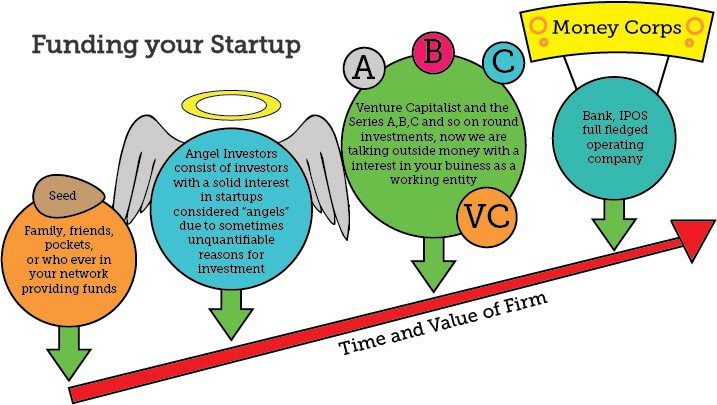 With the backing of multiple investors at different stages, a company should aim to have customers and sales in place to generate cash flow. The transition is made into a growth-stage company, which comes with a whole new set of challenges: growing the business, adding staff to support the expansion, and implementing a team to continue upsizing the company.

How to find investors

There are multiple ways to secure funding. Networking and utilizing personal connections are often the most effective approaches.

Raising money does not necessarily guarantee success. Here are a few examples of companies that raised millions of dollars and crashed soon after:

Here are some examples of companies that did not raise money and have grown to become incredibly profitable and lucrative businesses:

Please confirm deletion. There is no undo!