Philanthropy: Use Your Green for Good – Napkin Finance

Philanthropy
Use Your Green for Good 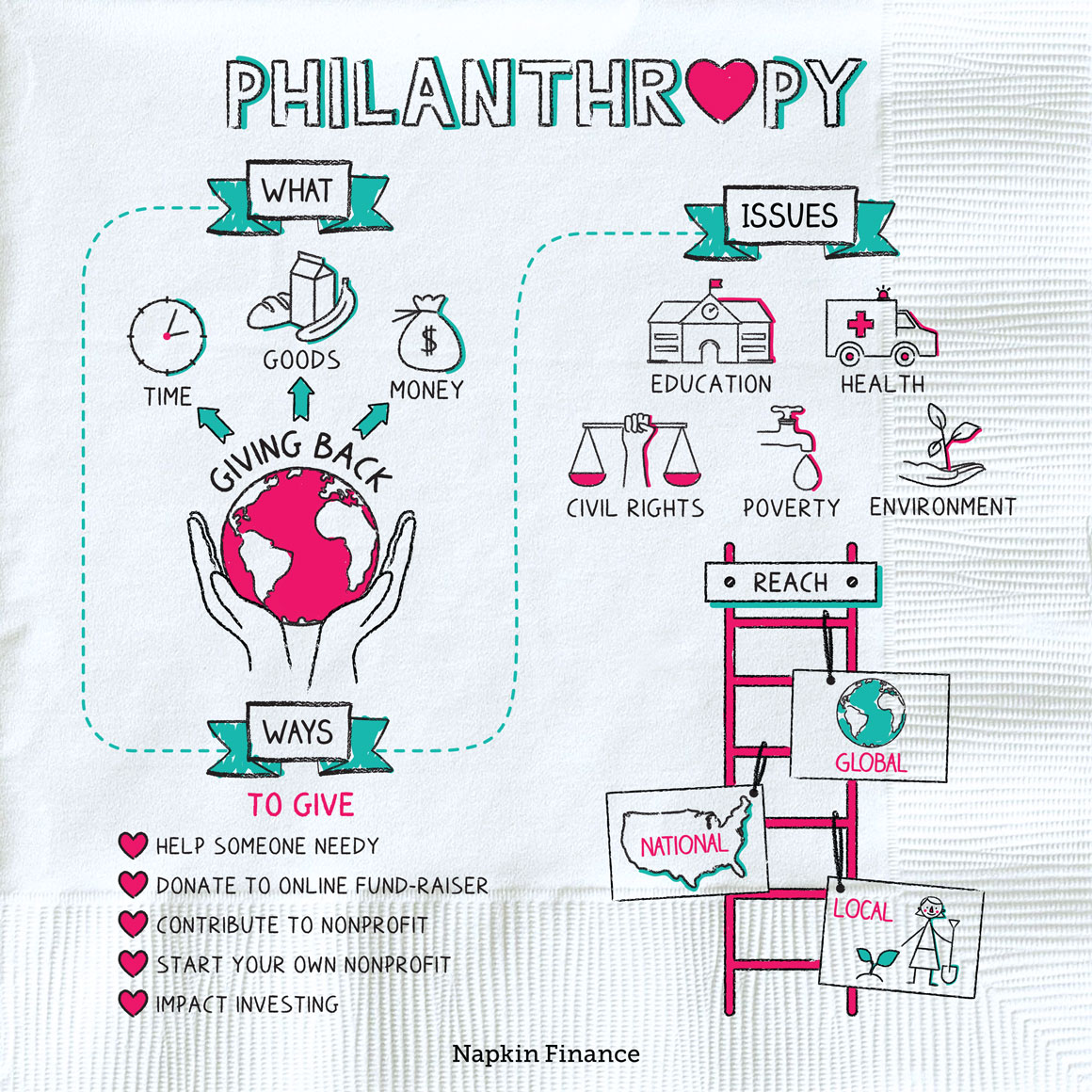 2020 has been a rough year, but there is a silver lining. Difficult times often inspire people to give to important causes, and there’s been an outpouring of philanthropic giving in recent months.

What exactly is philanthropy? It takes a few different forms. You can give to a cause using your money, time, or resources. And you can decide whether to donate to long-term initiatives, such as disease research or policy foundations, or to charities that address immediate needs.

The beauty (and challenge) of philanthropy is that there are so many deserving causes. Even under a large philanthropic umbrella, such as racial inequality, you’ll find a variety of needs, such as education, food security, and criminal justice reform. You can also distinguish between large, national charitable organizations and local, grassroots efforts in your own community.

The many ways of giving back

His Airness: Basketball icon Michael Jordan announced that he and his Jordan Brand company will donate $100 million (not a typo) to racial justice and social equity causes over the next ten years. Corporate America is getting with the program too, with Walmart, Comcast, Johnson & Johnson, and other major brands making similar pledges.

Army of K-Pop: After the K-Pop group BTS made a $1 million donation to Black Lives Matter, they challenged their fan base to match that amount. Their fans easily matched the $1 million mark in their first 24 hours, though their fundraising total is still climbing.

The Hero of Swann Street: A Washington D.C. resident took in 70 protesters who were being pepper-sprayed and were at risk of arrest. Rahul Dubey welcomed the protesters into his Dupont Circle row house, where neighbors sent over pizzas for the crowd. Dubey let them stay until curfew lifted the next morning.

Two for one: Want to support the Black community but also help reduce the spread of COVID? Consider buying face masks from Black-owned businesses. (And to answer your most obvious question: yes, you can order a matching scrunchie, too.)

There is no one perfect investment choice for ever

A futures contract is an agreement to buy a specif

According to a recent article by @cbsnews, "The Na

This includes $9 trillion in mortgages, more than