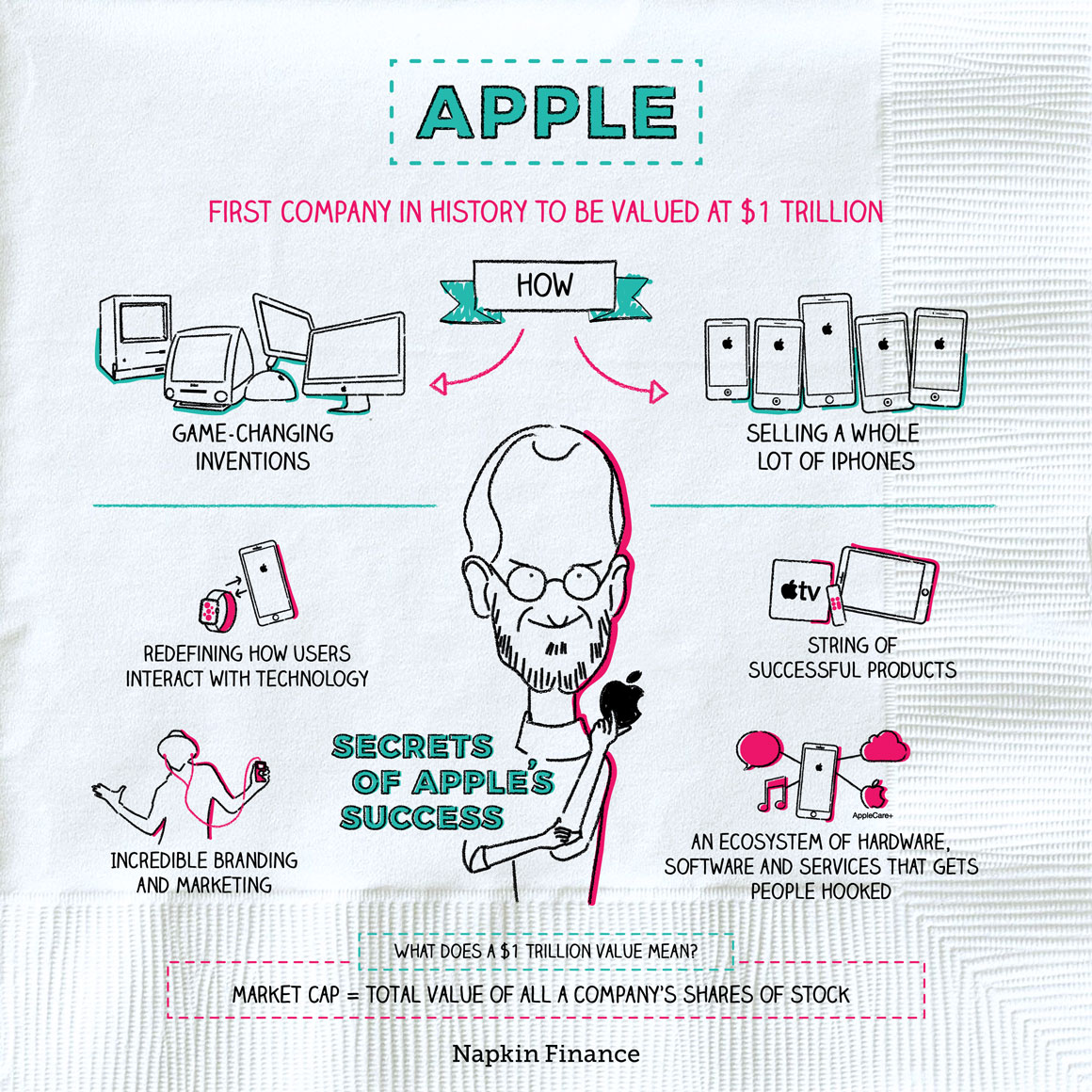 Apple was the first business in history to be valued at $1 trillion—the largest value ever recorded for a publicly traded company.

Apple has come up with many game-changing inventions in its lifetime, from the iPod’s click wheel to innovative operating systems to intuitive ways of interacting with touchscreens and touchpads. Yet, Apple has grown as large as it is today mainly by selling a whole lot of iPhones.

How Apple makes its money 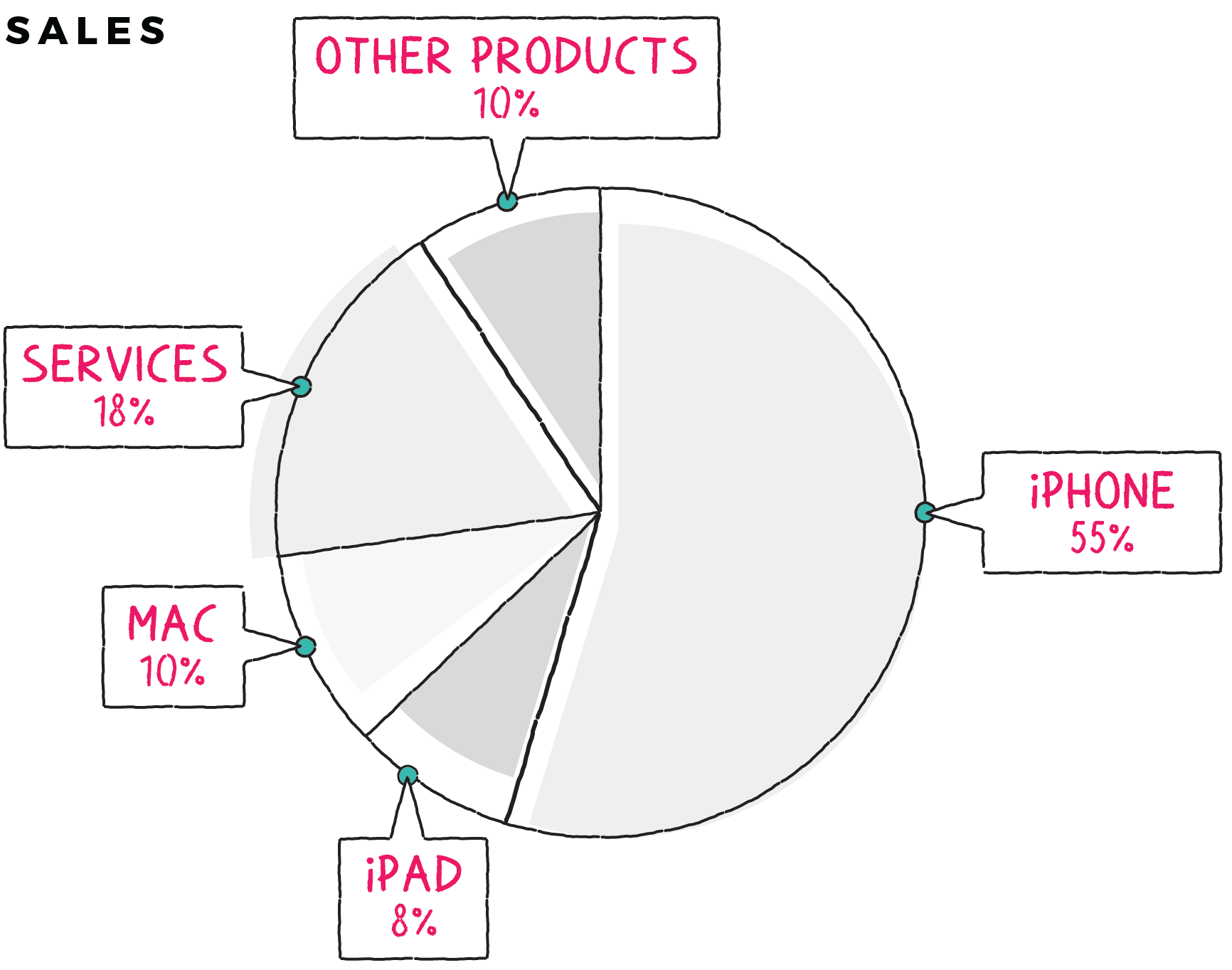 Purchases of iPhones make up about 55% of Apple’s annual sales. Apple services—which include the App Store, Apple Music, and iCloud—account for the next biggest portion at 18%. The rest of Apple’s money comes from sales of Mac computers, iPads, Apple Watches, Apple TVs, and other miscellaneous products.

““Our belief was if we kept putting great products in front of our
customers, they would continue opening their wallets.”“

Apple has become such a valuable company by:

What does a $1 trillion value mean?

The $1 trillion refers to Apple’s market capitalization, which is basically a measure of the total value of every share of the company’s stock. Since each share represents a tiny slice of ownership of the company, adding up the value of all the shares gives a picture of the value of the company as a whole. It’s a bit abstract, and it’s a value that is always changing as Apple’s share price moves up or down.

A brief history of Apple

1976—Company founded in a garage in Los Altos, California, to develop and sell personal computers.

1980—Apple has its initial public offering.

1984—The Macintosh computer is launched.

1997—Steve Jobs returns to Apple and develops a plan to turn around the now struggling company.

“That has always been the objective of Apple: to do things that really enrich people’s lives.
That you look back on and you wonder ‘How did I live without this?’”— Tim Cook

The legend of Steve Jobs

The impact that Apple cofounder (and its eventual CEO) Steve Jobs had on the company’s growth and success can’t be exaggerated. With his trademark glasses and black turtlenecks, Jobs was known not only as an innovator but also a smart businessman with an eye for design and a knack for staying ahead of what consumers wanted.

Jobs is widely recognized for driving Apple’s creativity and innovation and as the force behind products that continue to transform the technology sector today.

Some investors worry that Apple has become overly dependent on the iPhone. Consumers’ tastes can change quickly, so it’s possible that a couple of less-than-perfect phone iterations could hurt Apple’s ability to charge a premium price for its products. Plus, as companies grow larger, inevitably their growth starts to slow. Many of Apple’s competitors, including Microsoft and Alphabet (the parent company of Google), are growing as well and catching up to its valuation.

Reaching a $1 trillion valuation was a major achievement for Apple and a sign of its tremendous success. Whether or not Apple will be able to keep growing, innovating, and making the hottest phones on the market are probably the biggest questions facing the company and its investors.