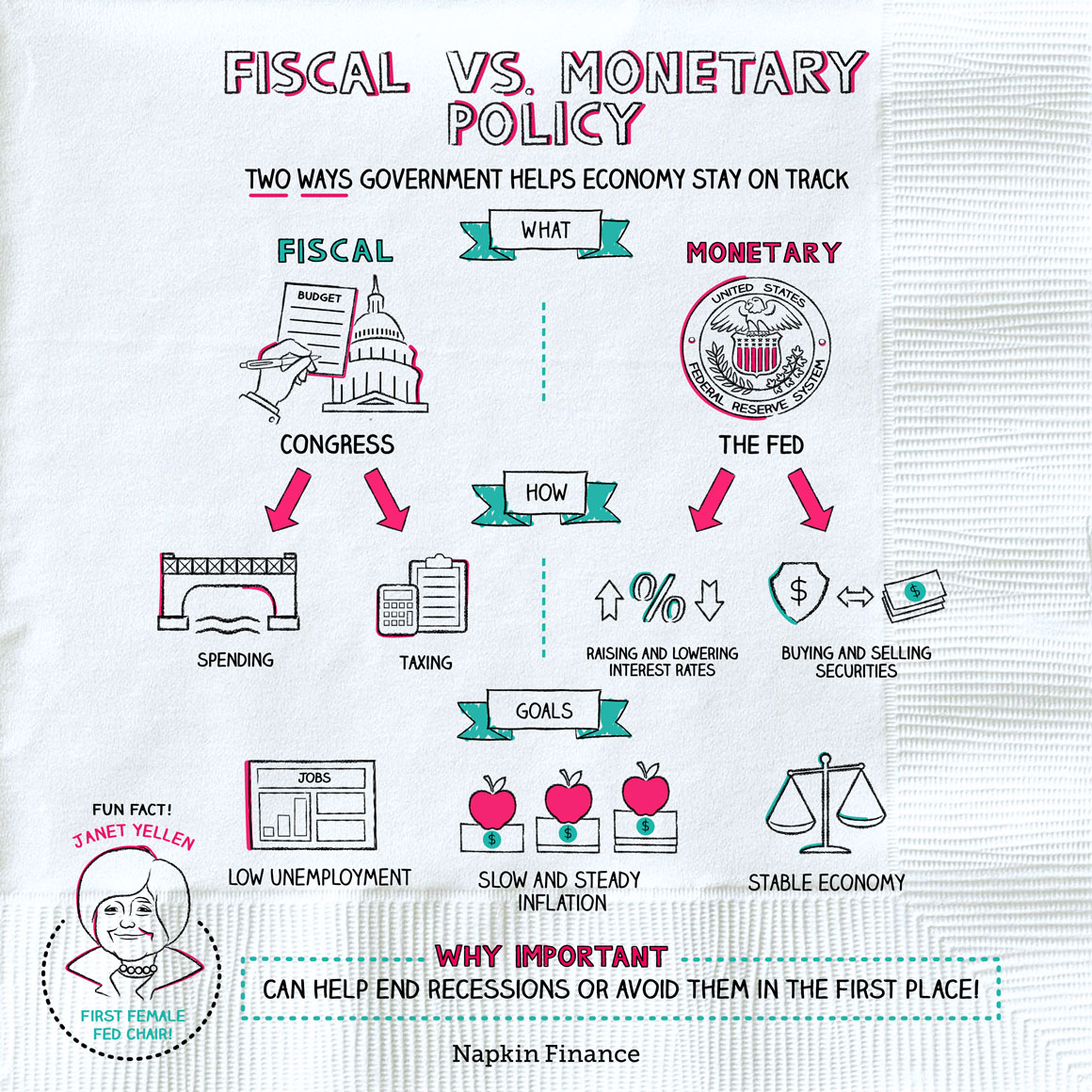 Fiscal and monetary policy are two tools the U.S. government can use to help the economy stay on track.

Fiscal policy describes the government’s decisions on whom it taxes (and how much) and where it spends its money.

The basics
Why necessary

It’s important for the government to be able to intervene in the economy because otherwise it can occasionally head into a tailspin.

The government helped pull the U.S. economy out of the Great Depression through heavy spending on public works projects (i.e., through fiscal policy). And the Fed helped ease the Great Recession by lowering interest rates and buying securities (i.e., through monetary policy).

Sometimes these policies are used to help get the economy out of a crisis. But they can also be used to try to avoid a crisis in the first place.

Suppose economic growth is slowing down and experts are worried the economy is heading into a recession. Either (or both) monetary or fiscal policy could be used to help boost growth:

On the flip side, suppose the economy is growing very quickly and experts are worried about rising inflation (which can make the economy unstable). Again, either or both monetary or fiscal policy can help slow down growth and reduce inflation:

Although keeping the economy on track—in theory—seems like a goal that all politicians should be able to get behind, the policies can still be used for political purposes.

The Fed is supposed to be politically independent so that it can follow its best judgment on the economy even if the party in power doesn’t like its policies. (For example, the party in power may favor a faster-growing economy—but if it’s growing too fast, the Fed may feel the need to slow it down.) But the Chair of the Fed is appointed by the president, so whether it’s truly independent is an open question.

And the party in power in Congress may use fiscal policy to deliver on promises made during an election—such as by cutting (or raising) taxes on the wealthy or reducing (or increasing) welfare spending—in the hopes that doing so will get them elected again next time around.

Politicians can also use fiscal policy to reward their districts or to fund pet projects—such as by getting a tax break or a subsidy for an industry that’s big in their home states.

Fiscal policy has to do with money the government takes in through taxes or spends on its various programs. Monetary policy, by contrast, can refer to any action taken by the Federal Reserve (and for the most part has to do with interest rates). Both can be used to boost economic growth when needed or slow economic growth if inflation is picking up.