What is the definition of Currency? - Napkin Finance
Home Napkins Currency 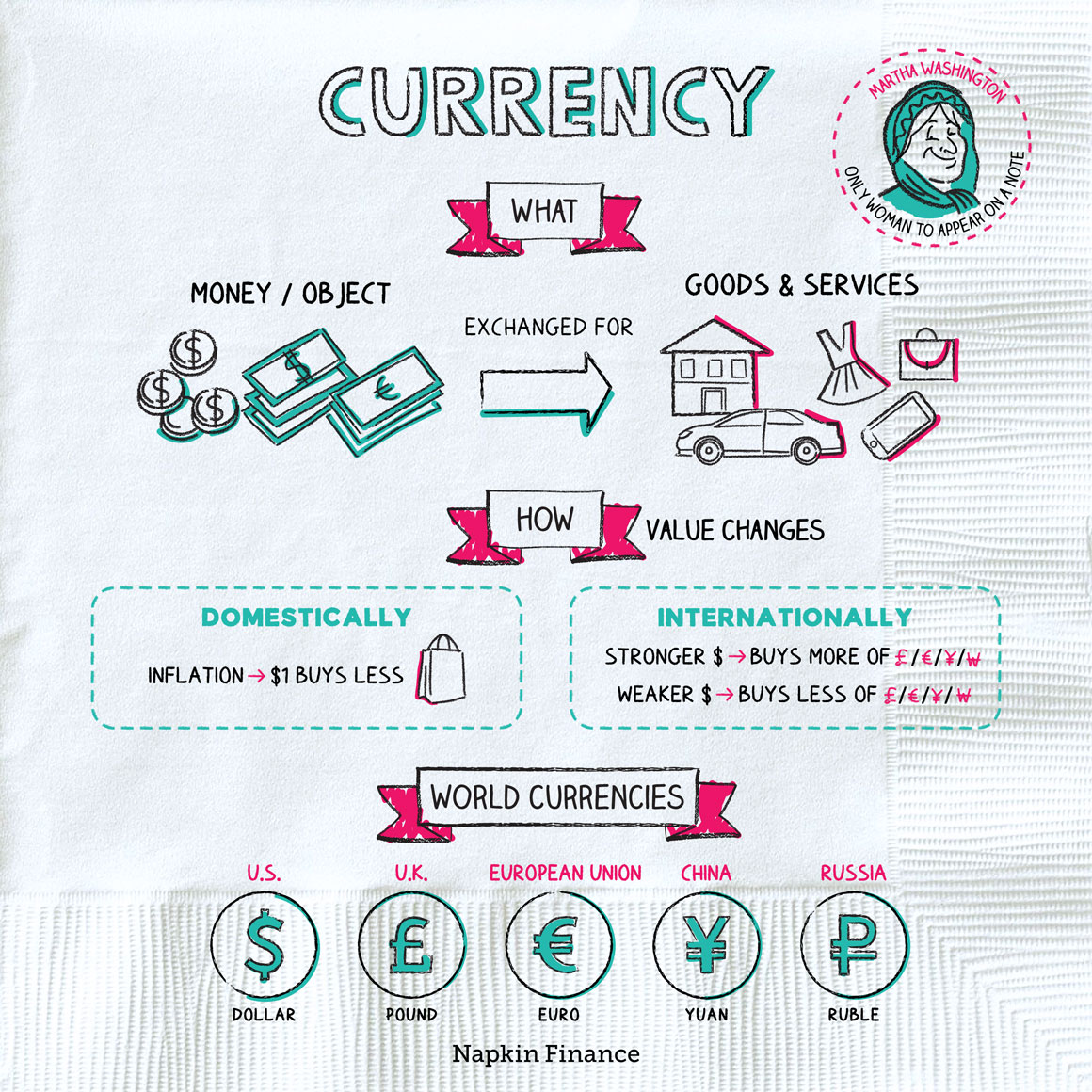 All About the Benjamins

Currency is anything that people use to store value or trade for goods or services. Currency can be paper and coins, such as dollars and cents, or even an object, such as beads.

Typically, currencies are controlled by a government. There are 180 different well-established currencies used around the world today. That number gets much larger if you include controversial forms of money, such as cryptocurrency (which not everyone agrees truly counts as a form of currency).

Why is currency worth anything?

Unlike gold or diamonds—which have value because they are scarce resources—currency has value even though it’s not made of anything particularly special.

The upside of currency is that it makes it easier to buy and sell a wide variety of goods, to save for later spending, or to blow your whole paycheck in an evening of online shopping.

The downside of currency is that in times of extreme political or economic turmoil people may start to doubt that a particular currency has value, which can lead to an economic crisis.

How changes in value

Although $1 will always be worth $1, currency can lose (or gain) in value compared with other items.

Factors that influence currency values can include:

For the most part, every country has its own currency.

Some of the major global currencies include:

Cryptocurrencies are virtual currencies not issued by a government or other central authority. Cryptocurrencies exist only online, so they typically can’t be used to buy your morning coffee or fill up your gas tank. But the number and range of businesses that accept crypto as payment is growing.

Cryptocurrency is controversial—some people feel that it is as bona fide (or more) of a currency as the U.S. dollar. Others believe it’s closer to Monopoly money. Whether or not cryptocurrency moves further into the mainstream will depend on if more people start to agree that it has value.

If we didn’t have currency, society would probably function on a barter system, in which people could trade one good or service for another. For example, a farmer and a tailor could trade a bushel of wheat for a shirt.

Additionally, throughout history a number of different items have been used as “commodity currencies,” such as:

Currency can be anything that stores value and is used in exchange for goods and services. Although mainstream currencies are generally issued by governments, there are also alternative currencies, such as commodity currencies and cryptocurrency.