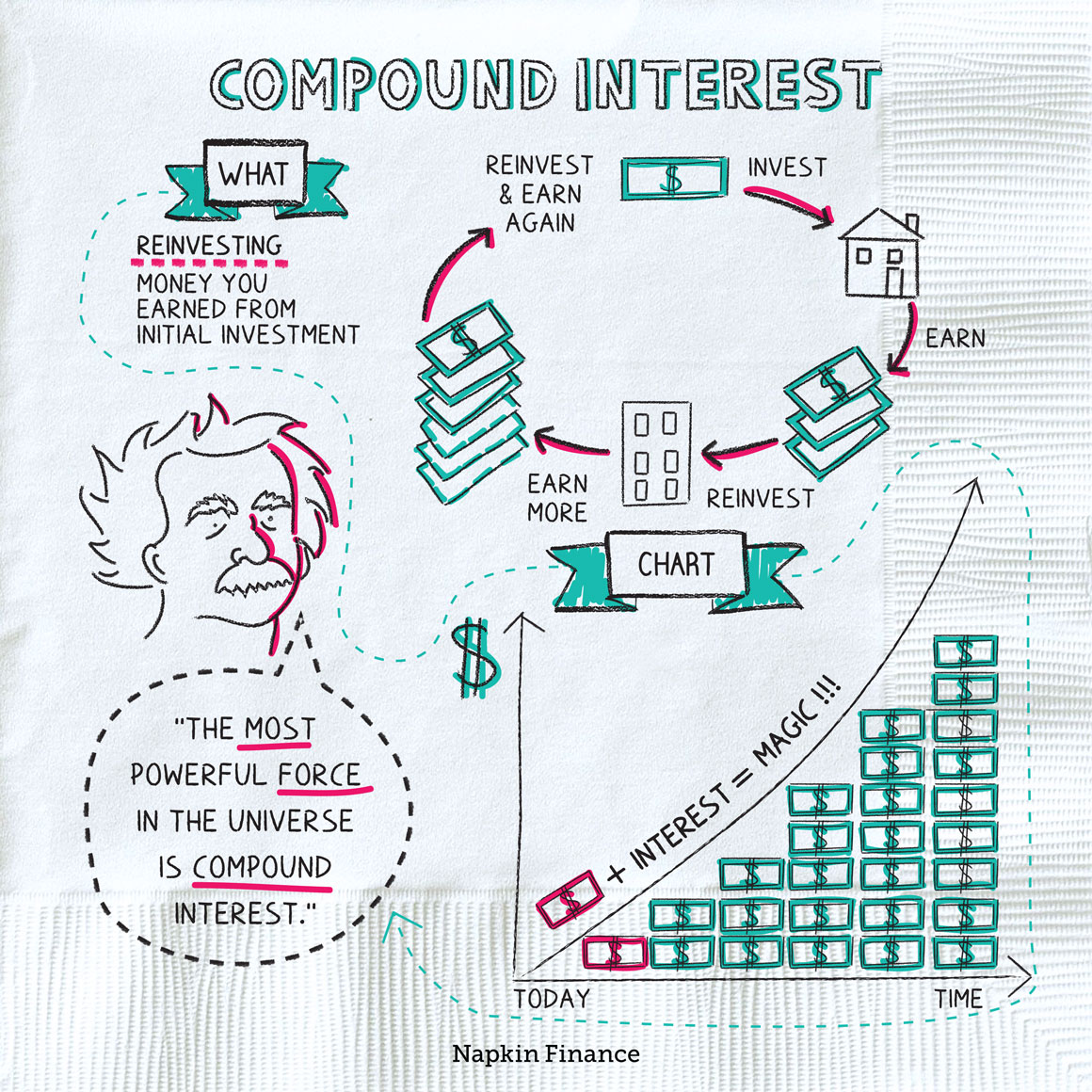 The most powerful force in the universe is compound interest.

The magic of compounding

You’re probably already familiar with the basic concept of earning interest: You put $1,000 in the bank, and the bank pays you a little bit of interest in return, such as 2% per year. At the end of the year, you’ve earned $20.

Compound interest refers to earning interest on the interest you’ve already earned. If you keep holding your money in the bank, you’ll continue to earn interest not only on your original $1,000 but also on the $20 you earned. That means the amount of interest you earn will increase each year. In the second year, for example, you’ll earn $20 and 40 cents.

The magic of compounding is that your money grows at an increasing pace. That extra 40 cents may not sound like much. But over time and with big-enough numbers, compounding delivers mighty results.

Now do you believe in magic?

“My wealth has come from a combination of living in America, some lucky genes, and compound interest.“

Let’s get real here. The reason the penny example delivers such big results is that it uses an absolutely massive interest rate. Doubling your money every day (meaning a 100% daily interest rate) is the same as an annual interest rate of about:

Any starting amount of money can grow into a giant pile of money with a big enough interest rate. Real-world numbers are typically a lot smaller.

Compounding always speeds along your money’s growth (unless you don’t let the interest you earn continue to grow). But three main things can help turbocharge your compounding:

Suppose you let your money grow for 10 years in the following situations:

Obviously, starting with more money is a big help. But the extra eight percentage points of interest makes an enormous difference too—at a 10% interest rate, you end the decade with twice as much money in each case as you would with a 2% rate. The extra interest helps your money compound faster.

Now suppose that instead of just 10 years you let your money grow for 30 years. And suppose that in each case you’re also able to save and invest an additional $5,000 every year:

With enough time, a solid interest rate, and the ability to add money to your stash, even the real-world numbers can get pretty big. Now that’s some magic you can actually use.

Savings accounts will compound your money. But because they pay low interest rates they do so very slowly. Billionaires like Warren Buffett put their money in investments that pay more over the long run, such as:

That’s because, as we saw above, even just a slightly higher rate can boost your money’s compounded growth by leaps and bounds.

Compound interest refers to earning interest on the interest you’ve already earned. Compounding has been called the eighth wonder of the world because of the amazing way it can grow small sums into vast riches. In the real world, you can boost the compounded growth of your money by saving more, letting your money grow for longer, and seeking higher rates by shopping around with different investments.